Short interest in the domestic market decreased by -$23.9 billion, or -2.23%, to $1.05 trillion in the fourth quarter of 2021. The decrease in shares shorted was a reaction to an up-trending market in the fourth quarter (S&P 500 up +10.65%, Nasdaq up +8.28% and Russell 3000 up +8.92%). Most of this decrease, -$38.2 billion, came from short covering, which was offset by +$14.2 billion of mark-to-market increases in short interest. Short sellers decreased their bets as mark-to-market losses negatively affected their bottom lines in the final leg to year-end.

The sectors with the largest decrease in short exposure were Health Care (-$11.06 billion), Consumer Discretionary (-$10.75 billion) and Communication Services (-$10.71 billion). Both Health Care and Consumer Discretionary were two of the three sectors with the largest decreases in the third quarter as well. Only two sectors had significant increases in short exposure in the third quarter, short interest in the Information Technology sector was up +$7.27 billion and Materials sector up +$6.76 billion. 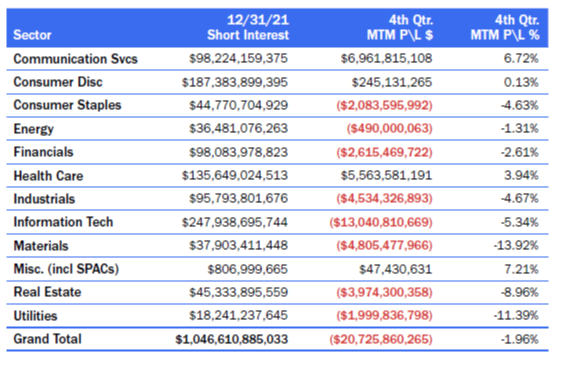 Market wide, Short Interest as a % of Float continued to decline in the fourth quarter, decreasing by -36 bps from 5.17% to 4.81%. But there were several sectors with larger-than-average declines as short sellers not only covered some of their exposure but reallocated their positions to larger cap securities in the sectors. The Materials sector had a -0.81% decrease, Information Technology a decrease of -0.52% and the Industrial sector a -0.51% decline. The Miscellaneous area (primarily SPACs) was the only sector with a large upward move in SI % Float at +2.58%.

The S3 SI % Float, which includes the synthetic long shares created by every short sale in the denominator, fell -30 bps over the quarter, from 4.67% to 4.37%. 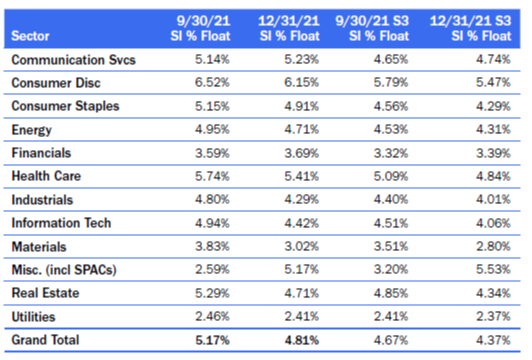 Short sellers found it slightly cheaper, on average, to short stocks in the fourth quarter with the average stock loan fee falling -13 bps from 0.69% fee to 0.56% fee. The trend to short larger-cap stocks (which reduced overall SI % Float) also reduced stock borrow expenses because of the significant stock borrow supply in these larger cap names. Due to the limited stock borrow availability, SPAC stock loan rates in the Miscellaneous sector continued to be the most expensive sector to short, with rates rising +1911 bps from 3.43% to 22.54%. The outsized jump in average financing expense in the sector is mainly due to the high cost of shorting the largest short in the sector, Digital World Acquisition Corp (DWAC), which has a 86.07% fee. 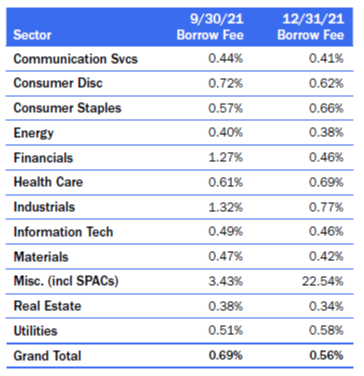 High stock borrow fees can test the conviction level of short sellers as financing costs can take a large bite out of expected alpha. As of December 31, the highest stock borrow fees for stocks with over $100 million of short interest are presented below.

Stocks with the Highest Stock Borrow Fees: As of 12/31

Short sellers were down -$20.7 billion in fourth quarter mark-to-market losses, -1.96%. With the Russell 3000 up +8.92% for the quarter, short sellers outperformed the market significantly by being good stock pickers.