We follow 790 shorted U.S. domestic biotech stocks with total short interest of $54.5 billion. Short selling in these stocks is highly concentrated, with the top twenty most shorted stocks totaling $23.1 billion, making up 42% of the total shorts in the market. 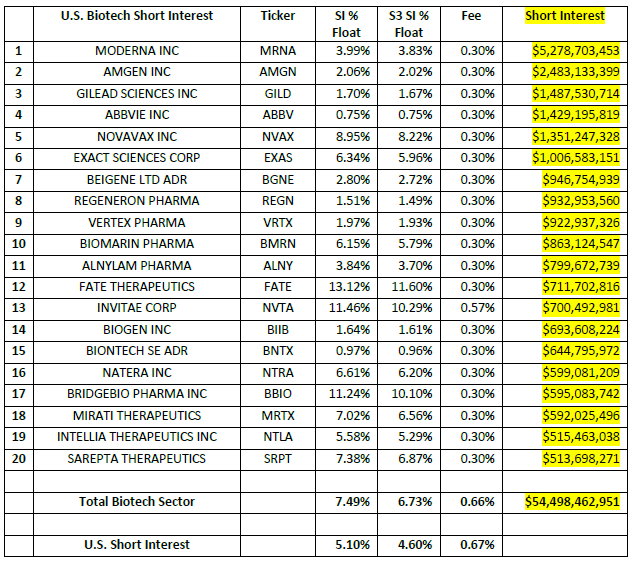 The following stocks had the largest increase of short exposure over the last thirty days. 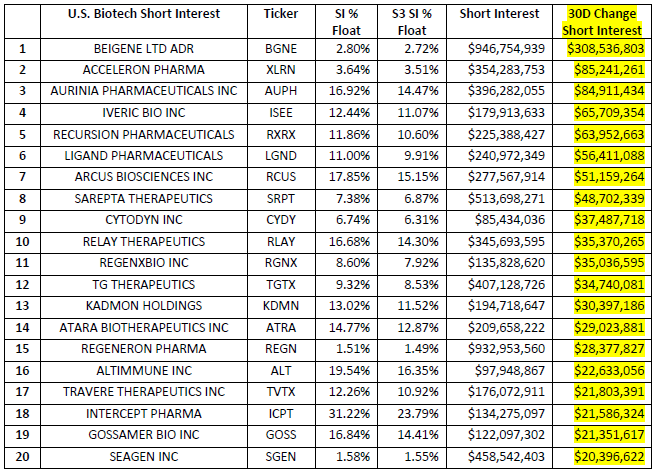 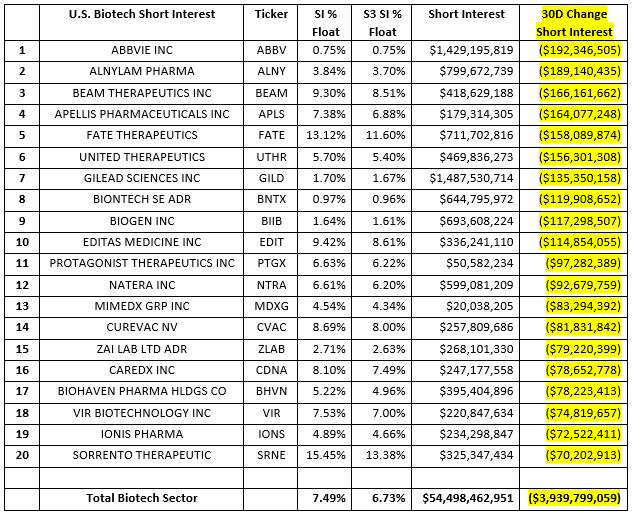 Changes in a stock’s short interest are made up of mark-to-market price moves and either short selling or short covering activity. While both change the overall amount of short interest in a stock, short selling and covering have a direct impact on the daily price moves of a stock. Shorts have bought to cover $1.63 billion worth of their biotech short positions over the last thirty days, taking some of their recent profits (which covered a large portion of their early year losses) and exiting the sector. 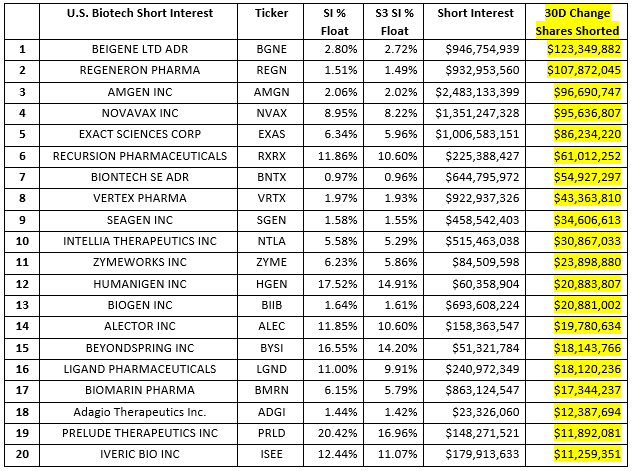 High Short Interest as a % of Float is a factor in the “crowdedness” of a shorted stock. Higher numbers can have negative effects on stock loan liquidity as well as trading liquidity. The following are biotech stocks with highest SI % Float and short interest over $50 million. The average SI % of Float in the U.S. is 5.10% while the average S3 SI % Float, which includes the synthetic longs created by every short sale in the Float denominator, is 4.60%. 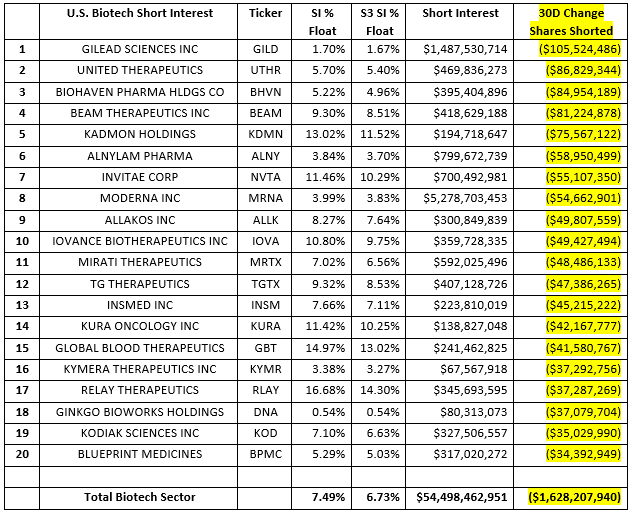 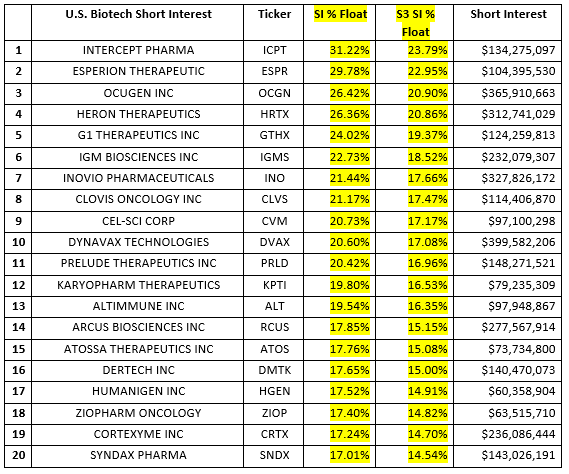 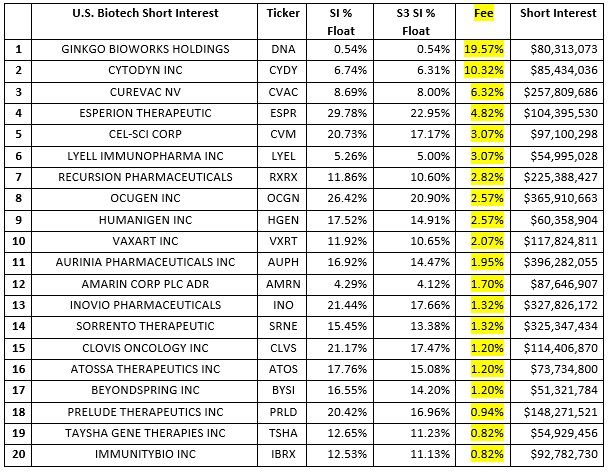 Overall, U.S. biotech short sellers are up +$2.35 billion in net of financing mark-to-market profits over the last thirty days. A return of +4.02% on an average short interest of $58.5 billion.

Short sellers are still in the red for the year, with year-to-date net-of-financing mark-to market losses in the U.S. market now at -$1.08 billion, a -1.78% return on an average short interest of $61.1 billion. Biotech shorts have made back 68% of their year-to-date losses over the last thirty days. 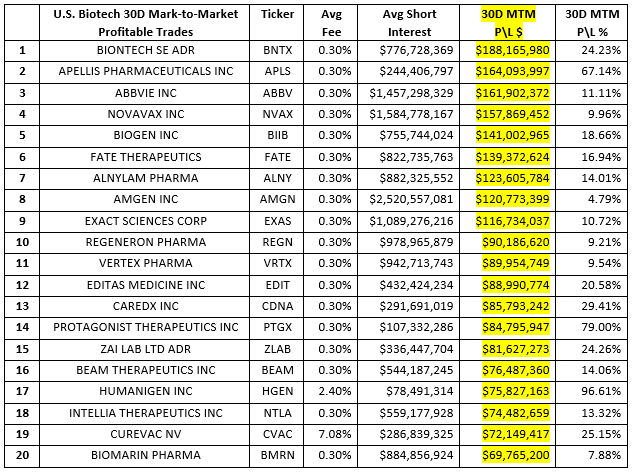 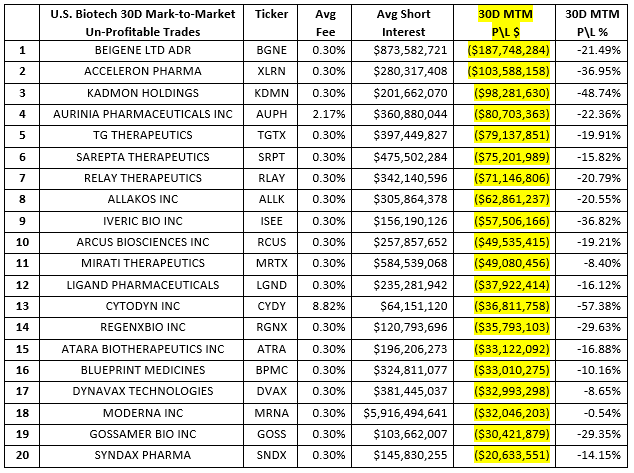 The definition of a “crowded” short trade varies from investor to investor but there are several themes that remain constant. A short can be considered to be “crowded” if some or all of the following occur: there are large amount of dollars at risk on the short side, a large proportion of a stock’s float is being shorted, there is illiquidity in the stock loan market and\or there is illiquidity in the trading market. The ten most crowded U.S. biotech stocks with over $50 million of short interest, according to our Crowded Score, are:

Not every Crowded stock is a Squeeze candidate. By overlaying our Squeeze algorithm over our Crowded Score, we can determine which U.S. traded stocks have the highest potential for a Squeeze, and which do not. The following ten biotech stocks have earned our highest Squeeze Scores, which does not mean a Squeeze will definitely occur, but means that if the present trends continue, there is a good chance for a Squeeze.

The Short Squeeze Is In Full Force: What’s...