Avis Budget Group Inc (CAR) is up over +90% in mid-day trading after being up +218% earlier in the morning. CAR did report a blowout third quarter with EBITDA topping $1.0 billion and surpassing estimates by over 40% and received board approval for an additional $1.1 billion in share repurchases but today’s stock move dwarfs yesterday’s +6.5% move in after-hours trading. CAR short interest is $2.37 billion, 2.56 million shares shorted, 21.10% Short Interest % Float, 17.42% S3 Short Interest % Float (which includes the long shares created by short selling in the float denominator), and a 0.30% stock borrow fee.

CAR is the second largest short in the domestic Trucking sector: 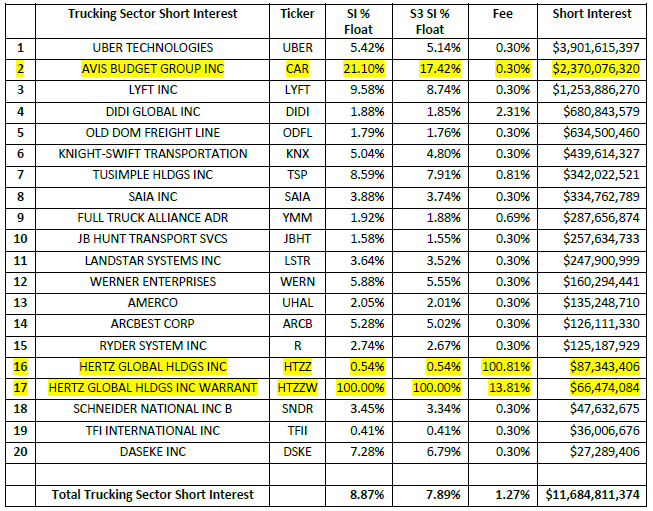 CAR short interest has increased by $782 million since the end of September even as its stock price rose by +47%. Shorts have been increasing their exposure to the stock over the last month with 104 thousand new shares shorted, worth $18 million, just over the last week.

While shares shorted have been climbing since mid-April, it was not until August that we saw CAR short selling increase in earnest. Since August 1st, CAR shares shored increased by 5.7 million shares, worth $981 million, an increase of +71% even as CAR’s stock price rose +107%. CAR short sellers apparently saw an overheated stock ready for a sharp share price pullback. 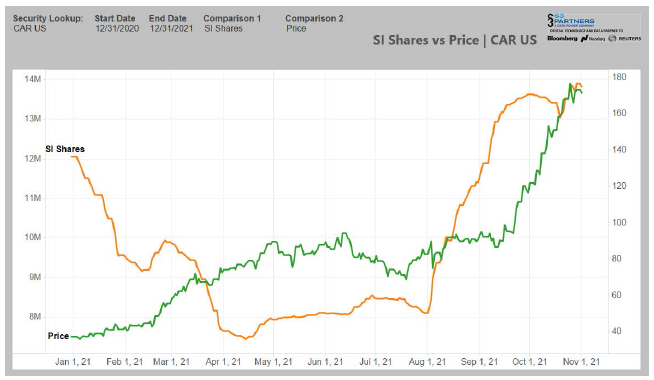 About the same time that we saw CAR’s short selling increase, we also began seeing CAR’s Crowded and Short Squeeze Scores increasing, CAR’s Squeeze Score was at a year-to-date low of 20/100 on mid-July, was firmly in the 70-80/100 range in late August and hit 100/100 in late September. CAR was a Crowded stock with increasing mark-to-market losses and now ready for a Short Squeeze. 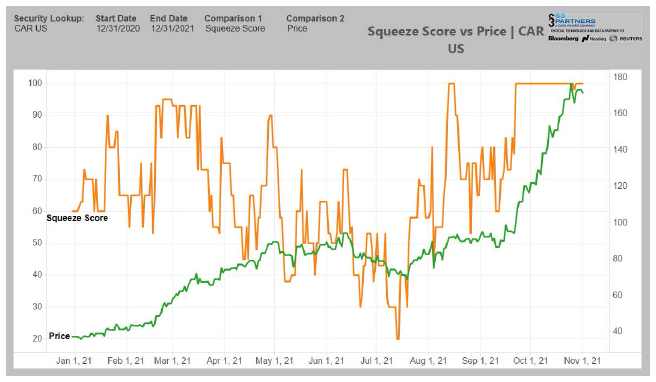 CAR already had a 100/100 score in our Short Squeeze metric prior to today’s price move. It will most certainly remain at a one hundred score, and we should see today’s short squeeze forcing some existing shorts to close out all or part of their CAR positions.

What also may occur is that new short sellers may initiate new short positions in CAR, expecting a pullback from today’s massive upswing as older shorts buy-to-cover. So, there may be a game of musical chairs in CAR today, some shorts leaving the game, but other shorts taking their seats.

As a result, CAR total shares shorted may not move as much as expected over the next few days but there will be multiple short sellers that have incurred significant mark-to-market losses and were forced to exit or trim their short position due to today’s short squeeze.

Looking at short selling trends over time provides insight into overall market sentiment as well as the strength of bearish conviction in individual equities. Our Blacklight SaaS platform and Black APP provides an up-to-date view of short selling and short covering on an equity, sector, index, or country-wide basis allowing investors\traders to better manage their existing long and short positions.

For deeper insight into short side data and analysis contact me at  Ihor.Dusaniwsky@S3Partners.com

For short side data and access to our research reports go to  https://research.s3partners.com .

reliance upon S3 Partners, the economic risks, and merits, as well as the legal, tax, accounting, and investment consequences, of such decisions.

MLB May Cause a Timeout in DraftKing’s Short...

The Short Squeeze Is In Full Force: What’s...